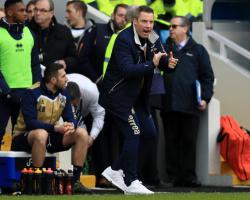 The victory was their second in two against Premier League opposition - Steve Morison scored the game's only goal to follow up their third-round elimination of Bournemouth - and came just five days after the abandonment of a controversial property scheme that threatened their future.

A proposed compulsory purchase order (CPO) of land surrounding The Den was on Wednesday ended by Lewisham Council having been a long-term concern for Millwall, leaving them at risk of relocation.

The issue had also overshadowed their recent fine form and pursuit of promotion from League One, both of which will likely be strengthened now that such uncertainty has passed.

"We can use the positivity around CPO issues, and performances on the pitch, to be a club moving in the right direction," said manager Harris, 39, whose 10th-placed team are five points off the League One play-off places.

"My team are focused on performance and playing well

(But) it helped us as a club; it helped the fan base with that positive news

It's only small steps, but it's in the right direction.

"Good week for us as a club

Individually and collectively we were better than Watford

We could have been out of sight by half-time.

"Watford played a strong side: all players that have played regular, top-level football

It surprised us a little, the strength of the side.

"I certainly didn't want a replay, so we were going to go even more aggressive.

"I'd like to be at home in the draw (in the fifth round); I'm not fussed who we get

I certainly think there'll be a few sides who won't fancy being here."

Watford repeated a mistake made by Bournemouth in the third round by naming a weakened team at The Den, one that retained only Younes Kaboul, Miguel Britos, Abdoulaye Doucoure and Stefano Okaka.

Their latest defeat amid a run of only one win in nine will intensify the pressure on manager Walter Mazzarri, who despite watching his team being consistently outfought and outplayed argued they did not deserve to lose.

"I will speak with the players face-to-face (on Monday)," said the Italian, 55

"We didn't deserve to lose

"I'm very disappointed, angry and sorry for our fans

This is also the reason we had to change (the team)

I want a team that in the next 16 games (until the season's end) fights for every ball."