Football Association looks into trouble at League One play-off final 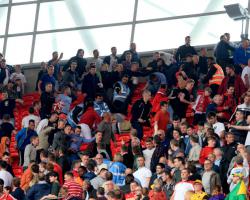 Barnsley's return to the Championship after their 3-1 win over the Lions on Sunday was overshadowed by trouble during and after the game.

A group of Millwall supporters attempted to break into the Barnsley end at Wembley forcing a number of supporters to move to stay out of the way as the violence broke out and the club has vowed to hand out lifetime bans to anyone found guilty.

The FA is working with members of both clubs and the Metropolitan Police to identify those who were involved in the disturbances and issued a statement saying: "The FA condemns the disorder caused by a small number of fans at the League One play-off final between Barnsley and Millwall at Wembley Stadium.

"We will work closely with the clubs, the Football League and the Metropolitan Police to identify those involved and take appropriate action.

"We would like to take this opportunity to praise the actions of our stewards and the police, who responded responsibly under provocation."

Problems continued well after the trouble had finished when officers were called to disturbances in Croydon between Millwall and Crystal Palace fans.

According to eye witnesses one member of the group of Lions fans was trying to fight a man wearing an Eagles shirt but his friends held him back.

The police restrained the man on Croydon High Street and a spokesman for the police said: "The man was detained to prevent a breach of the peace and has been released.

"No further action is being taken."