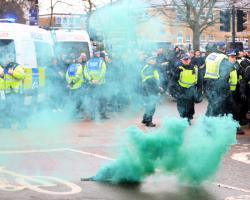 Millwall fans were heard chanting "DVD" and "You're selling three for a fiver" at Son, thought to be in reference to the racist stereotype of traders selling bootleg copies of films.

Press Association Sport understands the FA will investigate the allegations and are awaiting referee Martin Atkinson's match report, as well as observations from both clubs and the police

Millwall are still under investigation by the FA after Leicester complained about their fans' behaviour following their surprise victory in the previous round.

Any punishment for either issue, however, will be considered separately.

Millwall manager Neil Harris said after the match he had not been aware of the chants but accepted that, if proven, they would represent a blot on his side's excellent run in the competition

"I didn't hear anything, but the club, we won't condone that," Harris said.

"We came here in the right spirit, to enjoy an FA Cup quarter-final, so if that's proven to have been to the detriment of the competition then I'm sure it will be left to the authorities

We just want people to enjoy the game.

"Of course it's a shame, for both of us - Mauricio (Pochettino) wants to be talking about his team's quality.

"The focus comes away from what we've achieved in the competition

More than a dozen police vans lined Tottenham High Road at the front of the stadium and supporters of both teams had to be separated following skirmishes while bangers, flares and bottles were thrown