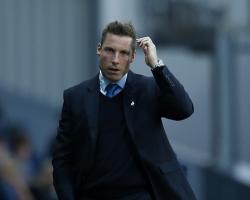 Harris, the club's all-time record goalscorer, was named interim boss after Ian Holloway was sacked in March but was unable to keep the Lions in the Championship.

Nevertheless, the vast improvement in performances since the 37-year-old took over has prompted chairman John Berylson to hand him the job full-time as they prepare for life in League One.

Berylson told the club website: "When Neil took over we were already in a very difficult position, and the fact that we came so close to taking the season to the last game says a great deal about the job that he and David (Livermore) have done over the past few weeks

"I have been greatly impressed with the professionalism and attention to detail Neil has demonstrated since becoming manager and he has undoubtedly inspired the players to produce some performances of real character.

"After five seasons in the Championship, relegation is undoubtedly a massive disappointment to us all

However, we started re-structuring back in February with the addition of a head of recruitment.

"Coupled with our flourishing academy, which under Scott Fitzgerald has begun to produce good young players, there is a real sense of optimism going forward.

"I am fully commited to the future and know that our team is in the hands of men well versed in what it takes to make a successful Millwall side."

Former Millwall midfielder Livermore has been named as Harris' assistant.

The Lions' relegation was confirmed on Tuesday night after fourth-bottom Rotherham beat Reading 2-1 to move four points clear with one game to play.