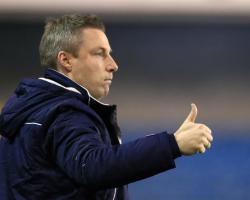 A convincing performance against Premier League opposition, with goals from Steve Morison, Shaun Cummings and Shane Ferguson, secured the League One side's place in the competition's fourth round.

It came after Bournemouth's Eddie Howe made 11 changes to a team that was without its usual fluidity, but, despite the potential for the result to further galvanise Millwall's season and the extra effort in training that went into achieving it, Harris believes his side have more pressing concerns.

"I'd like to play at home in the next round," said the 39-year-old, who has overseen four wins and a draw from an unchanged XI.

"(But) I would swap this victory for a win at Charlton, that's how big (next week's game) is.

"We knew Bournemouth would make changes, they have got a big few games coming up

We knew there would be some minutes for other people.

The players didn't quite get it at first and they had to stay a little bit longer on the training pitch.

"It wasn't that they didn't get it right, so come back later

We wanted to get messages across

The higher you go up the divisions, the minor details are really important

We showed that with our first goal."

Despite Harris predicting Bournemouth would make changes, it was still a surprise Howe, also 39, made 11.

His team appear comfortable in ninth place in the Premier League and, asked if he regretted doing so, he responded: "In hindsight with the result, yes, but though I haven't been forced, my hands are tied a little bit.

"We are so stretched, the Premier League is such a demanding league, we feel we need our best players available for selection.

"Marc Wilson has pulled his hamstring, so we're a body down and if that had been a first-team player, that would have been really catastrophic

We tried to protect the players we had fit.

It was really disappointing, because I was excited to see the team play before the game

We had a good balance between a lot of experience and a bit of youth, but this is a tough place to play.

"We didn't have that cohesion that we would expect

It was a very difficult game to watch.

"It's a really difficult one

"The majority of those players have played in the Premier League, but not together at the same time and that is the thing that has cost us."

The 21-year-old Dutchman joined the Cherries in the summer and was expected to play out the campaign with the south-coast club.

However, Howe told BBC Radio Solent the defender was instead set to head back to Stamford Bridge.

"I am not sure there are too many out there, hence why Chelsea would recall him," Howe said.

"With Simon Francis's suspension and Marc Pugh's injury and now Nathan going back, our defensive resources are certainly stretched."

The Bournemouth manager added: "It would be a huge blow to us as he's done so well

"It is easier said than to done to say we are going to go and recruit a player of a similar stature to Nathan."