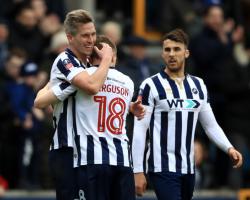 Another convincing performance was finally rewarded with the goal it deserved when Steve Morison's late, close-range finish ensured Watford became the second Premier League team the hosts have eliminated this season

Watford manager Walter Mazzarri had retained only four players from the team that last week drew 2-2 at Bournemouth in the Premier League, having spoken of his wariness of their schedule of three games in six days, but his gamble undermined them

As made sense against a much-changed team low on confidence, Millwall began with the same intensity with which they overwhelmed Bournemouth to win 3-0 in the third round

Unlike Watford, who retained only Younes Kaboul, Miguel Britos Abdoulaye Doucoure and Stefano Okaka, they were unchanged

Almost immediately after kick off, Jake Cooper found Morison on the right wing with a long pass from defence

After running further into Watford's half, the striker sent a well-weighted crossed into the area towards Lee Gregory, whose first-time shot hit the crossbar.

From their next attack Gregory made another dangerous run off another long pass, but was this time rightly ruled offside.

In the opening 10 minutes Tony Craig also threatened with a deflected shot from the edge of the area, and Cooper went close with a header.

Watford only began to appear remotely settled midway through the half when Millwall's intensity fell, and as a result of the composed Ben Watson's passing

Their only true sight on goal came in the 35th minute, but when Jerome Sinclair created space in the area he miskicked the ball and wasted his chance

Millwalll responded by launching another attack, from which Gregory closed down Costel Pantilimon to take possession before appealing for a penalty when Adrian Mariappa appeared to block his shot with his arm

The goalkeeper suffered an injury in the challenge, and was taken off on a stretcher and replaced by Heurelho Gomes after receiving treatment

Just on the stroke of half-time, the hosts again came close to scoring

Morison headed another of Cooper's passes towards Gregory, whose volley connected well but was acrobatically tipped over the crossbar by Gomes

The impressive Morison's work-rate and understanding with Gregory ensured the hosts continued to threaten in the second half, but as the clear chance they needed continued to elude them a replay began to look likely

It was in the 85th minute when substitute Shane Ferguson brilliantly picked out the unmarked Morison in front of goal with a cross from the left, and the striker deservedly capitalised with a powerful shot Gomes got a hand to but could not keep out

From another attack almost immediately after Millwall again found the back of the net, but Byron Webster's effort was ruled out for handball