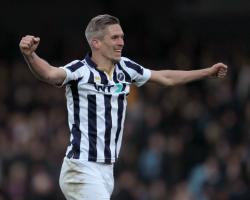 Twelve months ago the Lions were beaten 3-1 by Barnsley, who had only secured their place in the top six on the final day of the campaign.

Seven of their squad that day started at Glanford Park, including experienced striker Steve Morison.

The 33-year-old excelled against the Iron, scoring two goals and setting up the other as Millwall made light of their underdogs tag on the back of a goalless first leg.

Morison headed Millwall level right on the stroke of half-time to cancel out a close-range finish by Scunthorpe's Ivan Toney.

After the break the former Leeds and Norwich forward turned provider for strike-partner Lee Gregory before then rounding things off himself as the visitors notched twice in the space of six minutes.

Skipper Stephen Dawson fired in from 20 yards inside the closing 10 minutes to give the home crowd renewed hope, but rarely did they threaten a third goal.

The Iron may have finished nine points above the London club in the final league table, but over 180 minutes the Lions' superior strength told.

After an opening spell in which neither side seemed to want to keep hold of the ball, Millwall were the first to settle.

They applied some decent spells of pressure without being able to find a breakthrough against a Scunthorpe side who looked noticeably nervous.

It was against the run of play that the Iron went in front in the 19th minute - Toney pouncing from close range after Millwall had failed to deal with Josh Morris' inswinging corner.

After a niggly few moments in which tempers frayed - and referee Chris Kavanagh booked three players in six minutes; two of them from Millwall - United seemed to be finishing the half strongly.

Yet from nowhere, as the clock ticked towards stoppage time, a high ball to the back post from Tony Craig caused problems in the Scunthorpe defence and Morison got above Conor Townsend to bring the Lions level.

The home side came out for the second half early, but it was Millwall who maintained their momentum.

Seven minutes after the restart they were in front for the first time on the back of intelligent play by Morison, who muscled his way past Murray Wallace before teeing the ball up for Gregory to head home.

The goal sparked a pitch invasion from sections of visiting fans - who barely had the chance to return to their seats when they were celebrating again.

Scunthorpe failed to get the ball clear from a 58th-minute attack and Morison pounced to smash it into the bottom corner and give his side some breathing space.

Yet despite a few goalmouth scrambles, they could not find an equaliser.