Millwall dump out Bournemouth to cash in on team changes 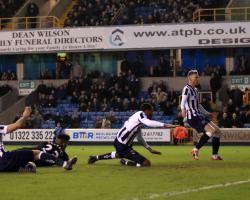 The Premier League team's manager Eddie Howe gambled in making XI changes to his team, who were outclassed and outfought as goals from Steve Morison, Shaun Cummings and Shane Ferguson secured a deserved victory.

It perhaps said much about where the cup is among each teams' priorities that Millwall's Neil Harris named the same XI for the fifth consecutive fixture, despite such a thin squad, and that Howe chose to make so many changes.

There was a degree to which that was predictable, but what did surprise - even amid a fine run of three wins and a draw from their past four games - was the quality of football Millwall produced and the way they outplayed their visitors.

Here, however, beyond the occasional sign of promise from the ÃÂ£8million defender Tyrone Mings - starting only his second match of the season after injury ruined the last - the numerous changes made ensured they lacked fluidity.

In only the fifth minute Morison wasted a fine chance when, after Lee Gregory unexpectedly won possession from Bournemouth goalkeeper Adam Federici, he struck wide despite a near-open goal when rushing a first-time shot.

Morison in turn soon created a chance for Gregory when chipping towards him in space in the area but when the striker's inability to control allowed the visitors to smother clear.

From Fred Onyedinma's 34th-minute run and pass Gregory was again played into space, but this time he struck just wide of the post.

Bournemouth had offered so little in response to Millwall's intensity and pressing that Emerson Hyndman's 40th-minute run and shot, into the side netting from the edge of the area, felt completely against the hosts' momentum, but in the second half they again re-established control.

Federici - whose mistake in their 2015 Cup semi-final with Arsenal cost Reading a place in the final - could unconvincingly only push Morison's dangerous shot as far as Cummings, who from five yards scored with a routine finish.

Howe had introduced top goalscorer Callum Wilson at half-time, and first-team regulars Steve Cook and Dan Gosling soon followed him off the substitutes' bench amid the manager's attempts to inspire a comeback.

As Millwall tired, they began to stretch the hosts and passed the ball with greater confidence

An away goal was regardless not forthcoming; Wilson eventually forced the ball in from a rebound in stoppage time, but it was rightly ruled offside and the hosts then responded by scoring their third.

In what appeared an aimless counter attack, Morison and David Worrall combined to create space in the area for substitute Ferguson, who then comfortably finished into Federici's near post.