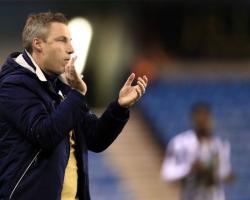 The Lions face Premier League defending champions Leicester at the Den on Saturday having overcome two top-flight opponents in Watford and Bournemouth to earn the fifth round tie.

Millwall were beaten in the play-off final last season by Barnsley and Harris believes that promotion, even via Wembley, is the most important objective for the sixth-placed club.

Asked if he would swap going far in the cup competition for promotion, he said: "100%

"The aim at the start of the season was to get to the play-offs and try and emulate getting to the final but actually winning it this year.

"We have had a couple of difficult spells at the start of December and the middle of September - two runs of defeats - but we are in a really good place at the moment.

"The team spirit is excellent and individually and collectively we are playing really well.

"This is a huge game for us, the players and the fans are really looking forward to it but I will admit that my mind has already turned to Chesterfield on Tuesday."

Millwall have been boosted by Calum Butcher being able to train on Thursday despite having an unspecified injury after Tuesday's league win over Port Vale.

However Harris has other fitness concerns.

"Butch has trained so he has had a few training sessions," Harris said

We are hoping they will be available for Tuesday, it is just whether they make it in time for this one

It would be last minute

"There are a few knocks and bruises from the other night, we have had a real physical run of games because we make them physical but they are the type of games where we pick up knocks and there will be a couple we will have to see if they will make it or not."