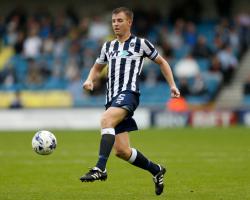 Leicester's squad includes last season's PFA Player of the Year, Riyad Mahrez, and Craig is looking forward to playing against "one of the best players" in the country.

He said: "It is a great challenge, they have a great squad, a great team and we are looking forward to them coming to the Den.

"It is a great challenge for me personally, whether Mahrez plays or whoever plays.

"I would love to play against Mahrez, he's one of the best players right now, it would be good to see who comes out on top and see how it goes.

"If he plays then fantastic, to play against a player of that calibre would be brilliant."

Millwall have already beaten two Premier League opponents in the FA Cup this season after accounting for Bournemouth and Watford, who both made a host of changes for the fixtures.

Craig believes that the victories were a result of Millwall's positive displays, rather than the top-flight teams underestimating them.

He said: "I didn't feel disrespected in any way

They have a squad and they certainly paid a lot of money for those players we played against in those two games.

"I don't think they underestimated us in any way.

"I think we had a really good account for ourselves, if you look back they were two very strong performances from ourselves as well.

"We just need to concentrate on ourselves, we have a strategy we will use on Saturday and hopefully that could work."

Lions goalkeeper Jordan Archer started his career at Tottenham but he believes moving to Sky Bet League One's Millwall was the best move for his career.

He said: "At Spurs I was behind some of the greatest goalkeepers in the world so I knew I wasn't going to get to play there.

"There comes a time in your career where you know when you have to go and get some games under your belt.

"This game is a massive game, it is kind of a free game as well because we are expected to lose.

We are going to go out there and enjoy ourselves."