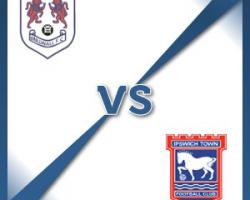 Millwall V Ipswich - view commentary, squad, and statistics of the game live.Holloway to ring the changesUnder-fire Millwall boss Ian Holloway will make changes for the visit of Ipswich.Centre-half Mark Beevers is suspended after his red card during the 4-0 FA Cup humiliation at Bradford, a defeat which cost the Lions a trip to Chelsea in round four.Holloway can hand a debut to Shaun Cummings and welcome back fellow full-back Andy Wilkinson, who was ineligible to face the Bantams under the terms of his loan from Stoke.January signings Dan Harding and Stefan Maierhofer who, like Cummings, did not join the club in time to play in the cup tie, also return but Paris Cowan-Hall has a calf injury which has delayed his debut and midfielder Shaun Williams is still suspended.Teddy Bishop (illness) is out for Ipswich and has not trained as he struggles with the bug which has affected the squad this week.Cole Skuse and Jay Tabb have trained though and should be in contention for the trip to The Den after shaking off sickness

Keeper Dean Gerken (hip) is out and rookie Michael Crowe is the only back-up to Bartosz Bialkowski.It is likely to force boss Mick McCarthy into the transfer market for a new goalkeeper