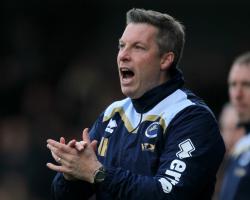 The Lions booked themselves a second visit to Wembley in as many years by beating Scunthorpe 3-2 at Glanford Park in the second leg of their semi-final to set up a meeting with Bradford in just under a fortnight's time.

Harris, whose side were underdogs heading north on the back of a goalless draw in the first leg, hopes the pain of losing to Barnsley 12 months ago will stand them in good stead to go one better.

"It will be a tough game - Bradford are a good footballing side and they will rise to the occasion as well," said Harris.

"It will be a great advert for this level

We've had two closely-fought games against them and I'm sure this will be another close encounter.

"And we'll lean on our experience of last year to help get us through."

Scunthorpe took the lead in an end-to-end contest, before Millwall's front two virtually pummelled the Iron into submission.

Two goals from Steve Morison, which sandwiched a header from Lee Gregory, put them in the ascendancy, although the home side set up a nervy final few minutes following Stephen Dawson's long-range strike.

Harris hailed the efforts of his front two - and the hard work of the rest of the team.

"It's unfair to pick out a single person because we were fantastic from back to front, but the front two have big hearts," he said.

"Over the two games, I thought they dominated Scunthorpe's centre-halves.

"You talk about match-ups and they've played against three centre-halves a lot this year and dominated them as well.

Yes they got the goals, but there was a lot of honesty and hard work behind them as well.

What a performance it was."

He said: "I'm guessing everyone associated with our club is feeling the pain of defeat and not getting the success which was in our grasp.

"We didn't really reach that level though and the goal just before half-time I felt gave Millwall a massive lift.

"I'll have a couple of days to get my thoughts together and then we'll sit down to see how we can improve the squad,

But it's left us feeling sore."