​In years to come, the football history books will read: On March 17 2020 - Nothing happened.

Sadly, the coronavirus has put a stop to the entire football calendar across Europe, and we are left twiddling our thumbs amid one of the tensest and most worrying times in recent history.

The world has come to a standstill.

But if you are stuck indoors under quarantine, or you are simply running out of episodes of Premier League Years to watch, why not check out what has happened on this day throughout the decades, and reminisce over past joys and irreparable heartbreak.

Were you among the #NFFC fans at Wembley #OnThisDay?  pic.twitter.com/iEOuzrX4zH

On this day in 1979, Nottingham Forest claimed League Cup success, beating Southampton 3-2 at Wembley to earn Brian Clough another trophy for his jam-packed cabinet.

The Tricky Trees went behind, but looked to have secured victory in the 83rd minute, when Tony Woodcock gave them a 3-1 lead. ​Southampton did notch a consolation goal in the 88th minute to make it interesting, but Clough's men saw out the match to lift the big trophy.

The Old Firm derby is one of the very best fixtures in the world. Hands down. And on this day in 1991, it was Celtic who claimed the bragging rights over bitter rivals Rangers, winning 2-0 in a fiercely fought Scottish Cup quarter-final.

As many as three Rangers players saw red in the match, and boss Graeme Souness blasted his bad boys for their disgraceful showing. Celtic had a man sent off themselves, but they deservedly claimed the victory in the battle of St Patrick's Day. Ah, magical evenings at Villa Park. ​Aston Villa boast a stadium worthy of European football, and in 1998 their loyal supporters were treated to a brilliant run in the UEFA Cup. But having lost the quarter-final first leg 1-0 to Atlético Madrid, their adventure was hanging in the balance.

And conceding a dreaded away goal in the first half of the second leg meant that the Villans had to come up with something special in the final 45 minutes. But Villa Park roared their team into life with 15 minutes to go, when a quick-fire double from Ian Taylor and Stan Collymore put them within one goal of a historic comeback.

Ultimately it wasn't to be, but they'll prove to be happy memories for Villa fans on days like this. 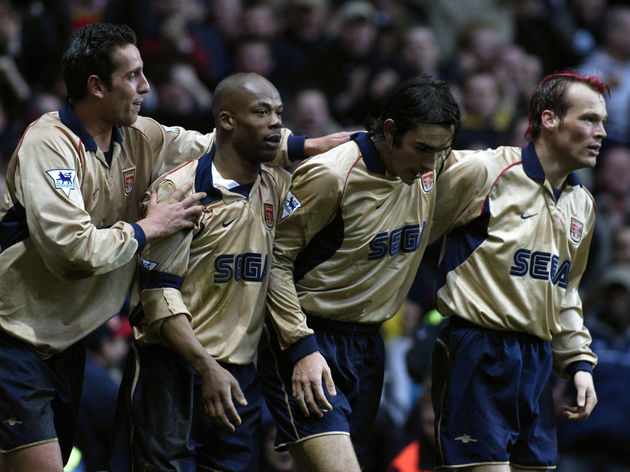 Ah, Arsenal's glory years. The Invincibles were just around the corner for the Gooners, but they still had plenty of fun prior to that record-breaking year. On this day in 2002, the Gunners beat Aston Villa 2-1, and Robert Pires scored a particularly memorable goal.

Chasing a long diagonal ball, the Frenchman sized up his marker, before bamboozling him with a flick over his shoulder and bearing down on goal. With the most intimidating goalkeeper in world football standing before him, Pires nonchalantly lobbed the ball over Peter Schmeichel's head to give ​Arsenal the victory. Happy days.

This man was a genius on the field. French side Bordeaux booked their place in the Champions League quarter-finals on this day in 2010, thanks to a stunning free-kick by Yoann Gourcuff. The midfielder needed only four minutes to open the scoring, whipping an unstoppable curling free-kick into the top corner from a very acute angle. Magic.

Bordeaux went on to win the game by two goals to one, dumping Greek side Olympiakos out of the European tournament. But this match is remembered for one thing only - that superb set-piece by Gourcuff.

Wait, somebody other than Celtic and Rangers actually win stuff in Scotland?! That's right, on this day in 2013, St Mirren defeated Hearts 3-2 in a dramatic Scottish League Cup final to lift the trophy for the first time ever.

Having fallen behind early on, the Saints bounced back and flew into a 3-1 lead with 25 minutes remaining on the clock. Hearts pulled a goal back late on to set the nerves jangling, but St Mirren held on to record a famous success in the club's long history.

Yep, for the second year on the spin, neither Celtic nor Rangers got their claws on the Scottish League Cup. It was Aberdeen's turn in 2014, beating Inverness CT 4-2 on penalties after a 0-0 stalemate in normal time.

The Dons celebrated success wildly at Celtic Park, whereas it was penalty-shootout disappointment for Inverness. What a horrible way to lose a final.

Who doesn't love a North London derby? One of the goal-iest fixtures in Premier League history, Arsenal and ​Tottenham Hotspur are known for putting on some proper ding-dongs.

Unfortunately in 2014, there was just the one goal that separated the two sides. But what a strike it was. The ball bobbled into the path of Tomas Rosicky, who without breaking stride, crashed an unstoppable drive into the far corner from an outrageous angle. A finish worthy of winning any derby.

1️⃣ year ago today we sealed our place in the last four of the @EmiratesFACup.

What a classic quarter-final encounter this was! ​Millwall had proved to be tricky opponents throughout the FA Cup in the 2018/19 campaign, and they were hoping to book their place in the semi-final against ​Brighton. A tense opening 70 minutes past by, but then - the game burst into life.

Millwall took the lead on 70 minutes, and sensationally doubled their advantage ten minutes later, to all-but end Brighton's hopes of qualification. Jurgen Locadia gave the Seagulls some hope with two minutes to go, and an unbelievable mistake from goalkeeper David Martin drew the visitors level with the last kick of the half.

The Premier League side held their nerve through extra-time, eventually winning the game on penalties and progressing to the semi-final. Heartbreak for the Lions.