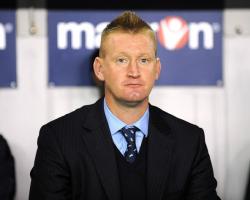 The Lions' third straight loss left them just three points above the relegation zone in the Sky Bet Championship.

Millwall chief executive officer Andy Ambler told the club website: "We are very disappointed that it hasn't worked out for Steve.

"He has been thoroughly professional in his approach to the job during his short period with the club and remains a very promising young manager.

"However, the board feels that it is in the best interests of Millwall that we make the change at this time and the search for a successor to Steve begins immediately.

"We thank Steve for his efforts and wish him the very best for the future."

Millwall angered some of their fans when they controversially appointed Lomas, a former captain of their fierce rivals West Ham, over the summer.

The ex-St Johnstone boss lasted just 22 matches, of which his side won five.

Coach Neil Harris and academy director Scott Fitzgerald, both former players at The Den, will take temporary charge of the team for the trip to Doncaster on Sunday.