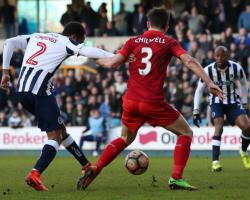 The League One side had to play the majority of the second half without Jake Cooper after he was sent off in the 51st minute for a second bookable offence.

But the deficit only inspired Millwall to a famous victory with Cummings finding the net in the 90th minute to heap more pressure on Claudio Ranieri and his beleaguered team.

With more than one eye on their Champions League trip first-leg clash at Sevilla next week and their Premier League encounter against Liverpool a week on Monday, Ranieri made 10 changes to his side which lost at Swansea.

Jamie Vardy and Riyad Mahrez were relegated to the bench while Demarai Gray was the only survivor from the 2-0 defeat at the Liberty Stadium - a result which leaves Leicester hovering dangerously above the relegation zone.

Millwall, sixth in League One, may have sensed an opportunity to shock the Premier League champions, but it was Leicester - despite the changes to personnel - who enjoyed the better start.

Bartosz Kapustka floated the ball into his path, and the youngster cut back in on his right foot only for his curled effort to fall wide of Jordan Archer's post.

As Vardy, who has failed to score since last year, warmed up on the touchline, Shinji Okazaki found himself through on goal

Off-balance however, Archer managed to parry his shot away.

Ahmed Musa was there for the follow-up, but his quick-fire shot was superbly blocked by Byron Webster

Okazaki then saw his header from the resulting corner magnificently palmed away by the Millwall stopper.

The Foxes, despite their miserable recent form, were upping the ante and it only seemed a matter of time before they would open their account

But despite an impressive opening 30 minutes, Leicester failed to find the back of the net and on this bobbly pitch, roared on by a raucous crowd, the hosts ended the first half on top.

Nevertheless, these were encouraging signs for the south London outfit.

But just six minutes after the interval Millwall were reduced to 10 men when Cooper was sent off for a rash challenge on Musa.

It should have provided the spark for Leicester to go on and win the tie, but it appeared to have the opposite effect with the hosts continuing to cause the English champions problems

With 18 minutes to go, and his side now on the back foot, Ranieri called for Vardy

Moments later, the England international had Archer scrambling to his far post as his 20-yard shot fizzed wide.

Then with 10 minutes to go, Okazaki had the perfect chance to win the tie

Marc Albrighton's cross fell into his path inside the six-yard box, but the Japanese forward failed to convert it past Archer.